I recently heard from a local physician who decided to take a ‘sabbatical’ from the practice of medicine. The ‘bureaucracy’ of daily practice, ‘lack of control’ and ‘feeling disrespected’ all contributed to the doctor’s decision to step away. I quote the email I received – ‘My toast is burnt’. This sentiment, fellow Doctors, is an increasingly common occurrence. Physicians are feeling burdened and increasingly isolated in their places of employment. In fact, the graphic below mimics almost exactly our Charleston Doctor’s complaints: 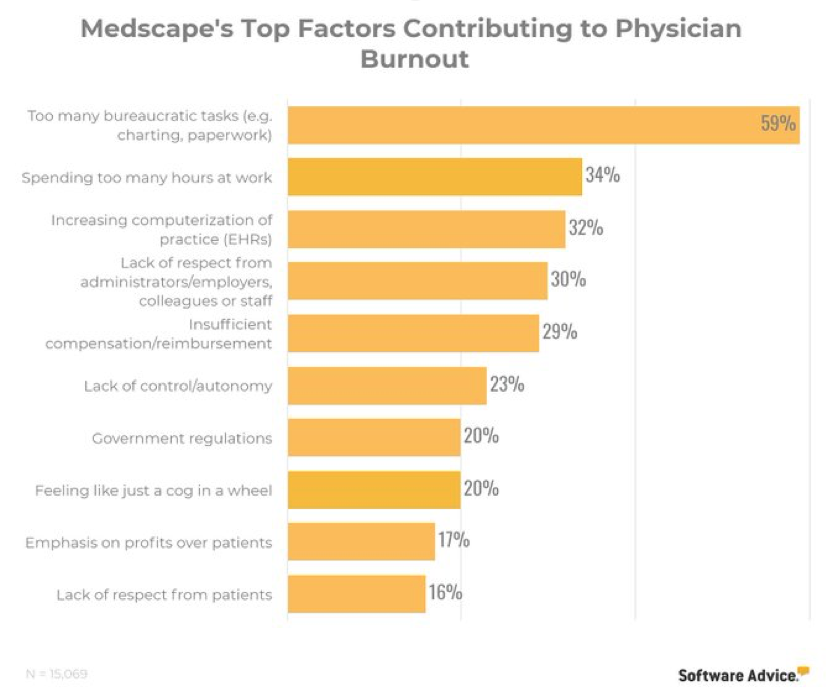 Another sobering fact is that Doctors have higher rates of depressive symptoms and suicide risk than the general population. Among many barriers to seeking mental health care include time constraints, and concerns about reputation, confidentiality and job repercussion and retaliation. The suicide rate of doctors is now the highest of any profession, including the military, which is considered a high stress occupation. One doctor takes his or her own life in the US every day.

Important drivers of burnout and depression in Doctors are lack of autonomy and meaning in work. We select into our profession driven, intelligent men and women who take pride in being able to make and implement decisions of great import for the well being of a fellow human. Throughout our training and formation as Doctors, we are given the idea that we will have authority and be independent actors whose decisions carry tremendous weight. And then – the reality of the graphic sets in.

What does this have to do with Charleston County Medical Society?

The current state of the PRACTICE of medicine is reflective of a collective action problem – a situation in which individuals would all benefit from a certain action with a cost that would make it implausible that any individual can or will undertake and solve alone. Burdensome practice, non-compete clauses, mis-guided and oppressive opioid policy, decreasing reimbursement, resentment from patients, certificate of need laws, relegation to being a ‘Provider’ or ‘Team Member’ … the list goes on.

Collective activism is good for strategy as well as morale. Disruption, innovation, solutions (cliché buzz words in vogue in the Healthcare administrative lexicon) will NEVER come from inside the system. Addressing the needs of Doctors and our profession will ONLY come from a neutral, outside-of-employment place made up of the individuals affected – CCMS is that place.

Collective action, a group of DOCTORS working together, with the goal of enhancing our status and achieve a common objective describes exactly what CCMS is about.


We need all DOCTORS – employed, independent, academic, medical students, residents to collectively address whatever we think is important in a forum made up of DOCTORS. CCMS is that forum.

Help us – we don’t want any more Charleston Doctors to drop out because their ‘toast is burnt’.